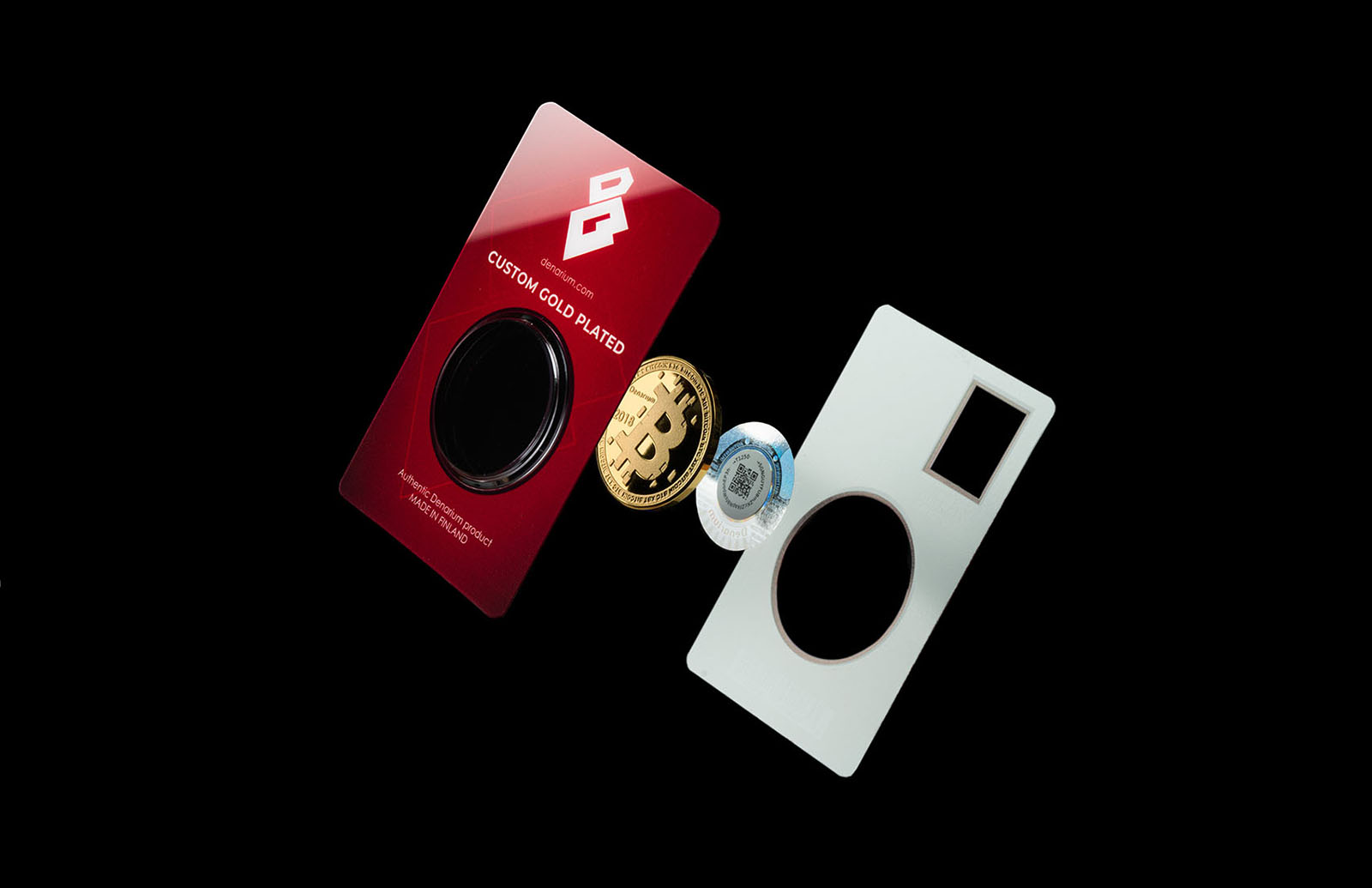 Bitcoin is digital gold. The best-known cryptocurrency is quickly becoming an alternative to the traditional safe haven and store of value, a.k.a. gold. Bitcoin and gold are often aligned against each other, but what if there is an alternative? A gold coin with a Bitcoin wallet in it. Denarium Physical Bitcoin is the answer. In this article, we’ll introduce Denarium Bitcoins.

First, let’s introduce Denarium, which many of our readers might not be familiar with. Denarium is a brand owned by Prasos Oy. This is the leading Finnish company in the cryptocurrency scene.

Prasos is best-known for its cryptocurrency exchange Coinmotion, which we have also introduced in our review. Coinmotion is currently Scandinavia’s leading platform for buying, selling and storing digital currency. Prasos has been in the crypto business since 2012 already.

Prasos is founded by Henry Brade, who is currently the chairman of the board. He’s the leading Bitcoin expert in Finland.

The idea of Denarium was born in 2011, according to Brade. Back then, a company called Casascius launched the first physical Bitcoin products. Casascius had to close doors due to regulation problems, but Denarium hasn’t had such issues in Finland.

Denarium is specialized in physical Bitcoins. These products have been in the market for five years now. The clients are mostly international and the Denarium website is also fully in English. We’ll look at the products closer in a bit.

Both Denarium and Prasos are well-known and reliable brands in the cryptocurrency scene. You can read more information about the company at prasos.fi.

How bitcoins are generally stored

Let’s take a quick dive to Bitcoin. This chapter is meant for newbies, who aren’t blockchain gurus yet. If you are familiar with Bitcoin, feel free to jump to the next chapter.

As you might already know, Bitcoin is a hundred per cent digital cryptocurrency. Information of all bitcoins is stored on the Bitcoin blockchain, which contains millions of Bitcoin addresses. Bitcoins are then moved from one address to another by performing transactions.

Bitcoin’s blockchain is basically a database decentralized to thousands of computers, which are located all over the world. Anyone can become part of the network by downloading the open-source program. The Bitcoin blockchain is practically impossible to hack.

Users manage their bitcoins with a wallet program. There are literally hundreds of different wallets depending on your device and operating system. A wallet software looks a bit like your internet bank. There are also hardware wallets, see the image below. Brands like Trezor Model T and Ledger Nano X provide ultimate security. Wallets are used to store, send and receive bitcoins. You can send bitcoins to any other wallet by using their public address. Each address is unique, and it’s derived from each user’s public key.

It’s important to understand that bitcoins are never stored on your computer, mobile or USB storage. Each bitcoin ever created has an owner. The information of this owner is always stored on the blockchain, which has the transaction history of the entire network since day one.

What you store on your mobile or desktop is your private key. This key gives access to your bitcoins and it tells the Bitcoin network software that you are the rightful owner.

Read more from our guide: What is Bitcoin?

What is Denarium physical Bitcoin?

Now you should understand how the Bitcoin blockchain works and where bitcoins are stored. So, what is a Denarium physical Bitcoin? How can there be physical bitcoins, if they are digital and stored in the blockchain?

Denarium has combined two rivalling products, Bitcoin and gold. These are often set against each other – needlessly so. There are more and more investors, who understand the value of having both gold and Bitcoin in your portfolio.

A gold coin is not just a good store of value, but also a beautiful collectable item. This is where Denarium products come in. A physical Bitcoin is in practice a gold or silver coin, which includes a real Bitcoin wallet. It means you can move Bitcoins “inside” the coin and also take them out if needed.

A traditional one oz gold coin might be too expensive for small investors due to the high price of gold (currently around 1500$ per oz). Denarium has an alternative: a gold-plated coin. They look like a gold coin but cost only €19.90 to €29.90.

This is a beautiful collectable item and a perfect gift for a Bitcoin enthusiast. Denarium has also silver and bronze coins and other products for presentation and storage purposes.

You can purchase a Denarium coin empty and move your own bitcoins to its wallet. Alternatively, you can also buy a coin pre-filled with bitcoins.

How to use a Denarium physical Bitcoin

Next, we’ll show you how the Denarium physical Bitcoin is used. The following guide is made by using a a gold-plated coin, which is an excellent choice for small investors. The price of each coin is just €29.90 (at the time of writing this article).

When you buy a Denarium coin you’ll get also some bonus material and stickers. Here is the content of our order. Let’s look at the Denarium coin. It’s being sent in a cover bag and the coin is also packed in plastic. Hence, there is little risk for damages during the delivery.

First, make sure the hologram behind the coin is real. You’ll get a small guide showing you the difference between a fake and a real hologram.

You’ll see a QR code on the top left corner; this is your Bitcoin wallet’s public address. Below the QR code, there is a serial number. Anyone can check your wallet’s transaction history from this QR code or the serial number, so don’t post a picture of them to your social media account if you want to keep this information private.

There is a small part of your public key visible behind the coin. This string of letters and numbers is not showing anything valuable.

If you buy your Denarium coin pre-filled with bitcoins, it must be activated. This can be done at Denarium website. The activation is a security process, which makes sure the right person got the right coin. Once you have activated your coin, Denarium will move bitcoins in your wallet.

There is no need for activation if you buy the coin empty.

How to send bitcoins to your Denarium coin wallet

Now we’ll show you how to send bitcoins “inside” your Denarium coin.

You can basically perform two types of transactions with your Denarium coin. You can send bitcoins in the wallet or you can extract the contents to an existing wallet. Let’s move first some bitcoins “inside” the Denarium wallet.

We recommend using a mobile wallet, which supports QR code scanning. Almost every mobile wallet has this support these days. In this example, we’ll make the transaction from a Coinbase mobile wallet.

First, you’ll pick the desired number of bitcoins to send and click next. After that, a form opens with a target address in it. Click the QR icon and your mobile phone’s camera should open. Scan the QR code behind your Denarium coin, which should update the address to the correct field.

If you don’t like QR codes and want to make the transaction traditional way, that is also possible. You’ll get the coin wallet address also from Denarium’s database at status.denarium.com/coin/. Input your coin serial number, which you’ll find below the QR code. Above is random coin searched from Denarium’s database. The address of your coin is the string of numbers and letters above the Buy now button, in this case, 14vh5MG… You can copy-paste the address from here. Remember, all crypto addresses are case sensitive. Use always copy-paste, don’t try to input them yourself.

You’ll also find a blockchain explored from this database page. Click the link titled Browse transaction history at Blockstream.com. This will open the Bitcoin blockchain explorer and your coin information in it. You can view your transactions and coin wallet contents from here.

How to receive bitcoins from your Denarium Bitcoin wallet

There is no limit to how many deposits you can make to your Denarium Bitcoin wallet. But remember, Denarium coins are not meant to be used as wallets used daily. They are meant to be your Bitcoin piggy banks.

If you want to extract your stored bitcoins, you must break the piggy bank. This is the only way to access your private key. Hence, you should only use Denarium coins for long-term bitcoin storage.

Next, we’ll break the Denarium piggy bank. The plastic around the coin is quite stiff, but you can cut through it with scissors. See the image below. After you have released the coin you should flip it. There is a hologram sticker behind the coin, which you must take out. Your private coin and QR code are behind it.

Now you need a wallet, which supports importing private keys. Popular choices are Mycelium and Electrum.

This operation is done pretty much the same way in all wallets. There is an import option somewhere, which allows you to input your private key or scan the QR code. There are also guides at Denarium website for several wallets. We use Mycelium’s Android mobile app in this example.

Download the Mycelium wallet from Google Play store and run it. This is how the wallet looks when launched the first time. We recommend doing the backup process because it only takes a few minutes. This enables you to restore the wallet to another device if you lose access to your phone. Click BACKUP NOW and follow the on-screen instructions.

Next, go through the following procedure to extract the bitcoins from your Denarium wallet.

Here is the import procedure also as images (source: Denarium).

Now you can send your bitcoins to any wallet address you desire. Mycelium wallet doesn’t have the prettiest GUI and you might want to send these bitcoins to your Ledger Nano, your Coinbase wallet or something similar.

We tested sending bitcoins from Mycelium to Coinbase. They were available in about 30 minutes.

This import procedure is a straightforward and simple process, which anyone can perform. You’ll find information on how to perform this process with other wallets at Denarium’s website.

Denarium Bitcoin products have already received accolades from crypto enthusiasts. This is a high-quality collector’s item, which is beautiful to look at. Not only these coins are nice collectables, but they also contain a Bitcoin address.

If you get a Denarium coin made of 100% gold, it’s an investment and a store of value already. But, with a Bitcoin address in it, the coin becomes a true survival pack for the next financial crisis. Finally, a note for newbie users. Denarium coins are not replacements for hardware wallets, such as Ledger Nano X or Trezor Model T. Hardware wallets are protected with a PIN code, which prevents unauthorized access even if they are stolen.

Denarium coins should be stored safely at your home. They are beautiful collectables but don’t have any added security features. If someone steals your Denarium coin they can also steal all bitcoins in it by doing the very same import procedure as explained above.

Take good care of your Denarium coins! If you send them as gifts to people with no Bitcoin knowledge, tell them to read this article for safe usage.

>> Buy your own Denarium coin today!